Museum under the Main Market Square

A fascinating journey through a thousand years of history

This time our Krakow guides propose a descent into the underworld;) We invite You to an unusual museum located beneath the Cloth Hall and the Main Market Square. Through the special curtain made of steam – with projections of medieval Krakow Market displayed on it –  we will enter the past.

The creation of this unique museum is the result of five years of archaeological excavations conducted beneath the surface of the Market. Archaeologists have found, among other things, fantastically preserved medieval cobbled roads, the remains of medieval buildings (houses, workshops, stalls), urban infrastructure (medieval plumbing!), a lot of objects associated with trade and everyday life and finally a huge 11th-century graveyard! As a result, it was possible to create an exhibition entitled Following the traces of European Identity of Kraków. Thanks to modern technology the exposition shows a 1000 years of reconstructed history of the city. Interactive maps, touch screens, holograms, multimedia projections and, above all, original relics of the past create a unique and coherent narrative. However, You should know, that this is not a story told from the perspective of kings and great politics! During our underground tour we will look at reality of medieval Krakow through the eyes of merchants and common residents of the city. We will learn about the conditions in which they lived and worked, about their daily problems and tragedies.

Do You want to understand this remarkable city? Start from meeting its oldest past in the underground museum Krakow! Professional Krakow Guide will show You the non-existing world! Could You imagine a better adventure for the whole family?

Tour adjusted to the age, interest and needs. Your anticipation will be our top priority!

Starting Point: The Cloth Hall, entrance to the underground museum 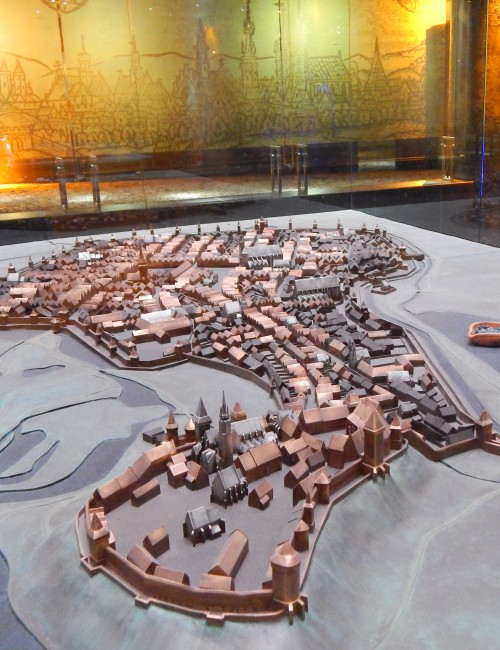 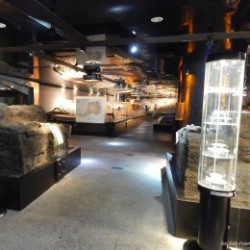 The museum exhibition is divided into several zones. The first one is devoted to issues related to local and long distant trade. Map of trade routes shows the role of Krakow in the Hanseatic League (a powerful association of merchant towns). We will also see the original goods and items, that were the subject of trade and a virtual reconstruction of the argument of two peddlers! The creators of the exhibition have prepared many clever and funny details, such as passage through the virtual … puddle. 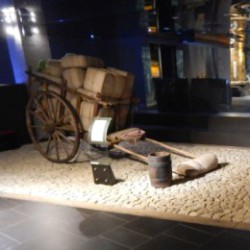 An unusual opportunity to see well-preserved 14th-century cobbled road. Reconstruction of medieval cartload loaded with goods realizes communication challenges of the time. You will know everything about medieval weights and measures. Special scales will tell You, how much You weigh in units used in medieval Krakow. We pass by the original archaeological layers seized during excavations and the exposition of the artefacts found here, such as jewellery, coins and other objects of daily use. 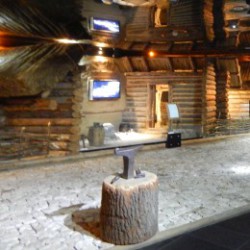 The foundation charter from 1257 created the legal framework for the functioning of the city, but Wawel Hill and the surrounding settlements were an important centre of political and economic life since the 10th century. There were 30 Romanesque churches in pre-charter Krakow! On the area of today’s Main Market (laid in 1257) was a settlement too! In this section we can see reconstructions of 12th-century workshops and traces of the tragic Tatar invasion (1241). Relics of burned houses preserved under the ground make shocking impression. Right next we will see extraordinary 3D holograms showing the appearance of the most important buildings (St. Mary’s church, Cloth Hall) changing over the centuries. 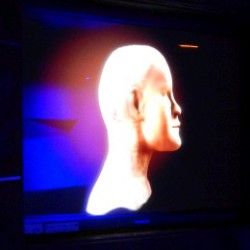 Over 200 burials has been discovered during the excavations! In this part of exhibition You can see some of them, next to the artefacts related to the religion and beliefs. Reconstruction of the faces created by anthropologists is especially impressive. Some so-called vampiric burials were found beneath the Market! What exactly does it mean, You will learn in the museum. 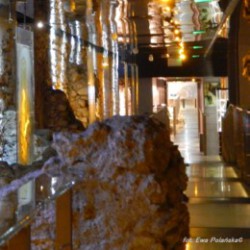 They are relics of the oldest, 13th-century brick buildings on the Market. The name derives from the fact, that merchants sold here luxury goods. Visitors move forward through a footbridge suspended above the original cobbled street, passing screens displaying images of craftsmen from illuminated, medieval books and glass-cases with products of different crafts. Unusual impression is strengthened by sound effects (cries of hawkers in different languages used in medieval Krakow). 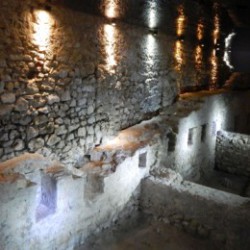 Stalls of Boleslaw the Chaste

Relics of the two rows of stalls, originally wooden, built during the reign of Duke Boleslaw and separated by paved street. Nearby we will see some skulls from the burials discovered by archaeologists. On the bones You can see traces of medical interventions (even trepanation!) and violent injuries. In each case comment prepared by anthropologists explains the exact causes of the death. 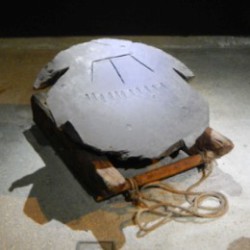 The remains of the building, which housed the official city scales. Apparently, this was one of the largest buildings of its kind in medieval Europe. The huge block of lead with special stamps of King Wladislaw Łokietek (‘the Short’) was found here. Lead, copper and salt were the most important export commodities of Krakow. At the end of our fascinating journey we will see the burial of the… horse and the last fragment of medieval cobbled road exposed in the Cloth Hall Cross.